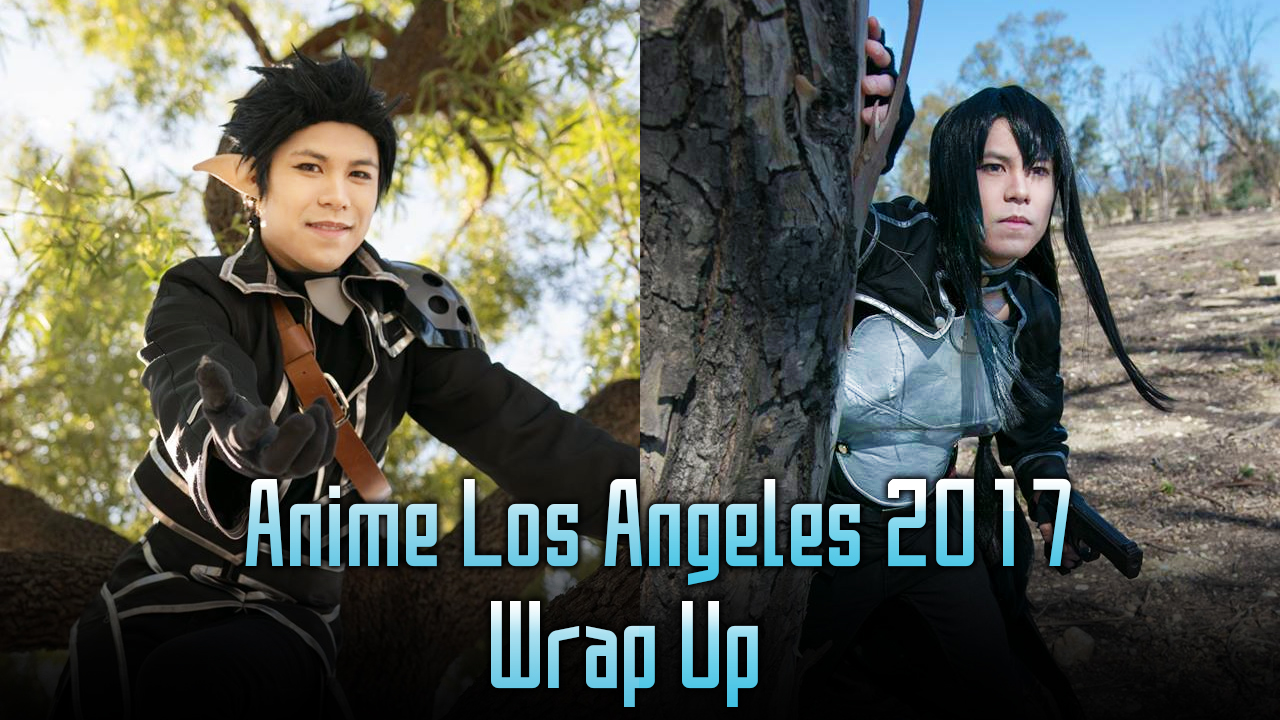 You can check out my Wrap Up/Con Vlog video for all the details below:

If you prefer to read, then keep reading!

So the night of Day 0 was extremely windy. The noises from the wind combined with my excitement made it really hard to sleep!

Before going to the con, I met up with Josh Cruz to do a new photoshoot for my Early ALO cosplay.

Josh was nice enough to meet up with us for a while on all 3 days so that we could get some photos in all of our cosplays.

The last time I had a photoshoot in my early ALO Cosplay was in 2015. I was super excited to finally get some updated photos taken!

For those of you that are cosplayers, you’ll know exactly what I mean when I say that you will go through a lot just for the right shot.

Not everything was super extreme in this photoshoot. Just had the basics of sun in my eyes or holding uncomfortable poses…

But I also hung onto a light post and also sat in a pretty high up tree!

After the shoot was done, we went straight to the One Piece themed Blue Rose Cafe where my “daughter” Saizen was working. Once again, I don’t REALLY have a daughter, but she sometimes cosplays as Yui and she kinda looks like half Celty and half Me, so that’s why she’s our daughter.

Blue Rose was pretty cool! It apparently replaced Con Suite. I would definitely go back again!

My brother and I got a lot of refills on chips but he was a bit disappointed that we couldn’t get any re-fills on chicken.

For those of you that have not been to ALA, it is a tradition for people to give out ribbons. Some people spend the entire weekend collecting ribbons and putting them on their badges.

One of the first ribbons I got was in the E-Gaming Lounge.

You could get a “hadouken” ribbon if you yelled it loud enough. It took me 2 tries.

Apparently I was so loud, that I scared people outside. Awesome!

Also, my shoulder piece flew off.

One of my favorite Voice Actors is Cristina Vee! I had met her back at Anime California 2014 and Bak Anime 2015 so this was my 3rd time meeting her.

To this day, my favorite roll of hers is still Mio in K-On!

I also got to meet Lauren Landa again! I met her back at SacAnime Winter 2015 and at ALA 2016. My favorite rolls she’s done are a tie between Kyoko in Madoka and Annie in Attack on Titan.

Actually, my favorite is her blooper in SAO season 1 where her character says “Look at me! I’m jiggling!”

They both played minor rolls in the Fairy Dance Arc of SAO’s first season as Alicia Rue and Sakuya, respectively.

Later that day, we went to the Celebrity Dub Show!

If you aren’t familiar with “The Dub Show”, it is a fan panel that offers people the chance to do some improv voice acting. They grab some footage from an anime and a group of 3 people dub over it with their own improv. The “Celebrity” version features actual voice actors from the industry at the panel.

Jason Charles Miller picked me to be on his team which was pretty awesome!

I try to go to this show as often as I can. I always tell myself “Oh, not this time” but in the end, I keep volunteering to go up and somehow getting picked.

So Erica Lindbeck is a great actress. My favorite role by her was as Kaori in Your Lie in April.

She hosted a “Let’s Read” panel. The idea was for us to bring in stuff for her to read and she would read just about anything as long as it wasn’t 18+.

I wrote a different ending to Your Lie in April and had her read it. I won’t say much more to avoid spoilers, but it was a happy ending! I forgot that I had given it the temporary name of “Your Die in April”, so it was very misleading!

There are a few key things that make me really grouchy at cons: Long wigs, heat, and lack of food.

Lucky for the people I was hanging out with, I was dealing with all 3 of those things.

So after we finished the photoshoots, we got some food and I change out of my GGO cosplay into a casual Kirito cosplay.

The only other thing we did that day was watch the Lindbeck and Lee panel hosted by, of course, Erica Lindbeck and Mela Lee.

The two are voice actors that also host a fun YouTube show that is called Lindbeck and Lee, so I had a great time at it.

After that, I went back to the hotel and knocked out early. I was tired.

「Underworld/Alicization/SAO3 Kirito」 - Good morning everyone! - To those who also went to ALA, good luck adjusting to everyday life again haha. - ALA was EXTREMELY fun!! I love huge cons like AX, but it was nice to go to a smaller and more laid back con ?. - I had so much fun that I wouldn't be able to describe it all in one post here to do it justice, so I'll get my ALA Wrap Up Video and Blog up as soon as possible! - To everyone that found me and said hello - it was great seeing you all! I always enjoy chatting with you all ? - So this is a BTS shot of what you will be seeing soon! - At ALA, I had photos taken for my Early ALO, GGO, and Underworld Kirito cosplays! - I am looking to get some Ordinal Scale photos taken hopefully this weekend or next weekend to show you all! - I have to give a big thank you to @cruzcosplay for taking time to do photoshoots for me every day of the con! –––––––––––––––––––––––––––––––––––––––– I do my best to respond to EVERY comment, so don't be shy! - Twitter: @ABlackSwordsman Facebook/Instagram/YouTube/Tumblr: AndrewBlackSwordsman Website: AndrewBlackSwordsman.com ––––––––––––––––––––––––––––––––––––––––

So Day 3 arrived and I already felt the post-con depression sinking in. I was having so much fun all weekend, I literally forgot that it would eventually end and I would have to go back to daily life again after.

We started off the morning by getting in line to get autographs from Cristina Vee and Lauren Landa again since not all of my friends met them on Day 1.

Despite arriving later than we wanted to, we got pretty lucky and were some of the last people to snag their autographs.

Right after was the autograph session for both Erica Lindbeck and Mela Lee!

We also got pretty lucky and were some of the last people to snag autographs.

Following that, we were finally able to walk around in the exhibit hall and check out the Artist Alley.

After some waiting, I finally did my very first Underworld/Alicization/SAO 3 Kirito cosplay shoot with Josh and then we left the con.

After leaving, I went to get some sushi with Celty and my brother and it was the most interesting Sushi experience I have ever had.

At most Sushi places, they are super polite and it is pretty quiet...this place was different!

Don’t get me wrong, the sushi chefs were really nice and the food was great. The interesting thing was the personalities of the chefs. It is hard to put it into words…

And I loved it! It was kind of refreshing to end my weekend with that plus with some great sushi.

Then I went home and slept like a rock and had work the next day and was a zombie all week.