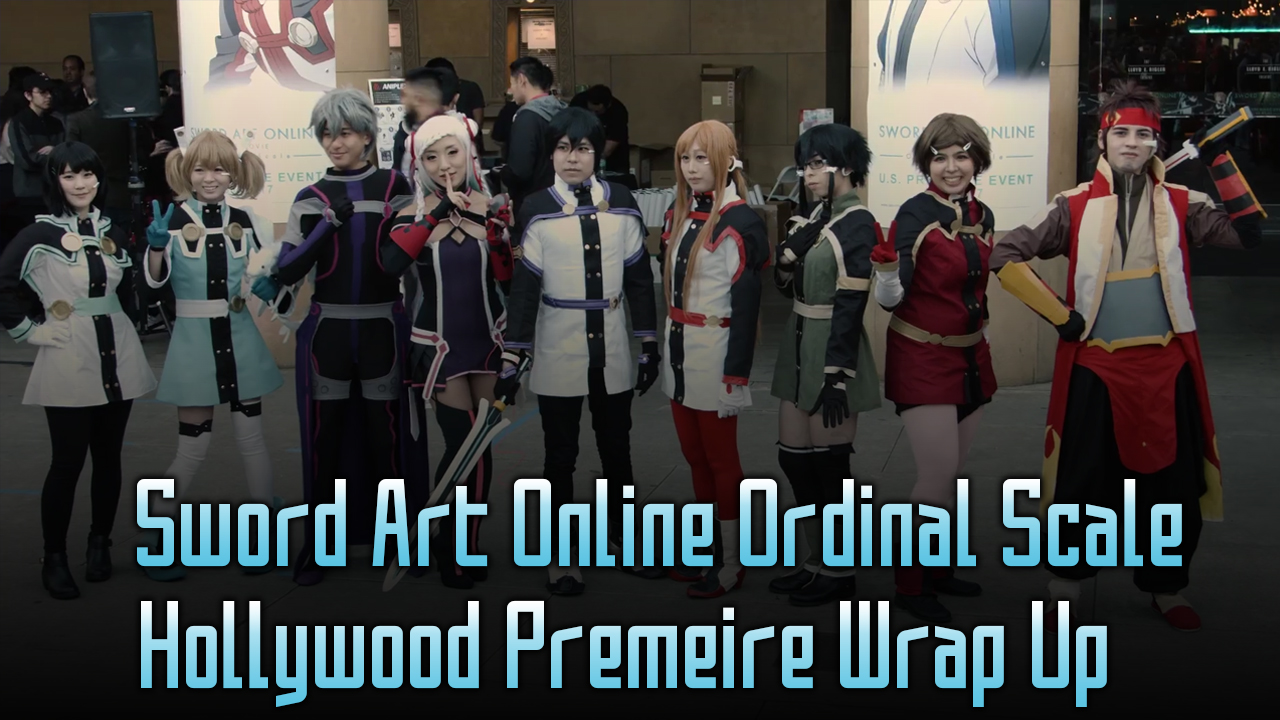 So for those of you that didn’t know, Sword Art Online’s movie Ordinal Scale premiered in the US on Wednesday March 1st at a special red carpet event in Hollywood at the Egyptian Theatre.

I was lucky enough to be the official Kirito cosplayer for the event and I had a ton of fun.

Especially for those of you that weren’t there, I’ll do my best to explain my experience at the event!

You can watch the video below:

If you prefer reading, then continue reading!

So before the event, I checked into my hotel and ate at a nearby Sushi place.

It was around 1pm and I knew I wouldn’t be eating until after midnight, so I stuffed my face with sushi, gyoza, and more

After that, we walked back to the hotel to get ready

Walking to the Con

I walked over with Celty and Kyndell.

Soon after arriving, Celty and I headed in for the Pre-show press conference

So we were in a theatre room.

And about 5 different people representing different companies (including Anime News Network) stood at the front to ask the guests some questions.

After all of the questions had been asked, we took some pictures with the guests in the front.

The lighting wasn’t too great in there, so I doubt any of the photos from in there will surface onto the internet.

While waiting for the Red Carpet event to start, I started mingling with the fans waiting in line and had a great time!

I was picking their brains on who their favorite characters were, which story arc they liked most, and also asked if they were constantly refreshing the page as soon as tickets for this event were available.

I met a lot of really cool people! Some people even travelled from pretty far just for this event.

Following that was the red carpet event!

Several important people got to walk the red carpet and have their photos taken.

We took several photos alongside the Japanese guests.

After the Japanese guests were finished, the English Cast of SAO had their turn at walking the Red Carpet too.

Myself and the rest of the cosplayers got to be on the red carpet with all of the English Voice actors I just named except for Patrick Seitz.

As others were having their turn on the red carpet, a few of the English Voice Actors started to go live on social media.

Bryce Papenbrook went live on Instagram and I was lucky enough to be apart of his live stream for a bit!

I was really honored that some fans recognized me in the background of his video.

Due to people in the comments telling Bryce to “say Hi to Andrew and Celty!” he sort of let me hijack his stream for a bit to say hi.

After that, he started to ask me how I got my cosplay together despite the movie JUST coming out.

Overall, I had a great time on the red carpet!

After the Red Carpet event was done, Celty and Atashi and I were helping guard the VIP Area and also took some pictures despite the lighting not being so great.

There was so much going on, that I almost forgot that I was there to see a movie.

It was really cool to sit down up in the VIP section and check out the movie.

So unfortunately, I didn’t get to see the last few minutes of the movie, but it’s okay!

By then, I had already bought tickets to see it again at a local theatre.

But anyways, I got to escort Abec up to the stage and then the 6 guests did a Q&A session

After the Q&A was done, we went up to the front to take some photos with the guests and then we were all done!

Then we walked back to the hotel

After that, we got an Uber and asked him to take us through the In N Out drive through.

A burger and fries had never tasted so good…

I was still so excited about what had happened, that I hardly slept that night

The next day, it felt like the whole thing was a dream…

So that was one of the most fun nights ever.

It was also great to meet Stella Chuu and work alongside her!

Anyways, thank you so much guys for checking out this video!

See you next time