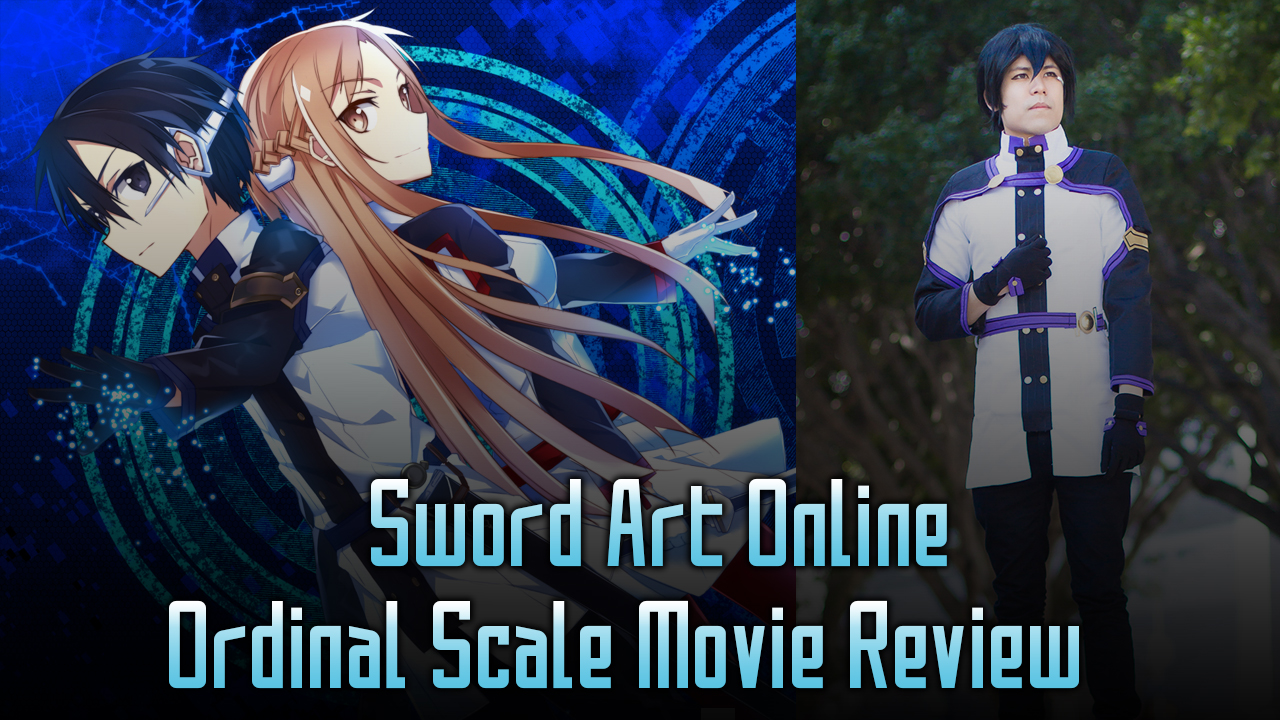 So I had the pleasure of watching SAO Ordinal Scale at the Hollywood Premiere at the Egyptian Theatre and I was really impressed!

I also watched it again at a theatre near me and I intend to check it out again when the dub is released.

You can watch my video here!

If you aren’t a fan of videos, you can just continue to read:

This review contains a ton of spoiler! You have been warned. If you have not watched the movie, please save this for later!

Every Aspect we Love About SAO

So the movie was fantastic. I am not ashamed to start this review by saying that.

Aside from its great music and extraordinary animation, what really made this great was that it contained every aspect of SAO that most of the fans really enjoyed in the first two seasons.

Though most of this movie’s inspiration was from the Aincrad Arc, there seemed to be little bits of inspiration throughout the film that was reminiscent of every single one of the 5 arcs that had aired at this point.

Death due to a Video Game

The first aspect of the Aincrad Arc that is present in Ordinal Scale is the possibility of Death due to a video game.

One of the biggest reasons that many casual fans stopped watching SAO after the Aincrad arc was because they felt that the intensity was lowered due to it being impossible to die in real life.

The discovery of Asuna’s memory being wiped when being killed in the game, along with the other SAO survivors, brought in that same pressure that was present in the Aincrad Arc.

Some could even argue that losing some of the most defining memories in your life is worse than death.

Towards the end, they even grew close to a high output scan similar to the nerve gear that could in fact kill the players again.

That intensity present in Ordinal Scale keeps you on your toes and concerned about the characters.

Next is more Kirito and Asuna screen time.

Let’s be real. Kirito and Asuna are the real OTP...but it feels like it’s been forever since we got to see them in action together!

Truly, the last time we saw them constantly fighting side by side was in the Aincrad Arc.

A lot of us have been thirsting for more on-screen Kirito and Asuna time and this film helped quench that thirst.

While a big focus of the movie was on the Augma and Ordinal Scale, I would say that Kirito and Asuna’s love was an even bigger focus.

Despite Asuna losing her memories from their time in SAO, she fought to continue to love Kirito.

On top of that, Kirito was willing to do anything to get her memories back.

Villain being from Aincrad

Most fans love the Aincrad Arc most, so Eiji being an SAO survivor was also huge.

My first gut instinct was that they were going to have the villain be another Laughing Coffin member, but perhaps that would have been way too predictable.

I found it to be a pleasant surprise that they chose to use a character from the Knights of the Blood Oath guild instead.

So let’s jump to the ALO/Fairy Dance Arc

Rush to Save Asuna

The main aspect from the least popular Arc was the rush to save Asuna.

So back in the ALO/Fairy Dance arc, Kirito found out that Asuna was trapped at the top of the World Tree. Kirito loves video games, but when something bad happens to Asuna, it isn’t a game anymore.

Something similar happened in the Ordinal Scale movie.

Asuna lost all of her memories of Aincrad. Kirito never cared about playing the AR game Ordinal Scale, but as soon as he found out that this game had stolen her memories, he got really serious.

One of my favorite scenes showing this is when Kirito is fighting a boss all by himself while the rest of the crowd is just watching.

They all sort of tell him “hey come on, it’s just a game...” as he’s yelling at them to get out of his way so he can get as much out of the boss as possible.

Next is what I like to call “two sides of Asuna’s Strength”.

So as you all know, Asuna is a tough girl.

The first one is in the Aincrad Arc in much of a literal sense. She is the second in command in a top guild, Knights of the Blood Oath.

She can mostly keep up with the beater, Kirito.

She’s super cold and is so fast with her Rapier that Kirito can’t even see the tip of it when she uses it.

The second one is in the Fairy Dance Arc in a different way.

A lot of people saw Asuna being captured as some sort of “sign of weakness” or that she became a “damsel in distress”.

If that is your opinion, I won’t discredit that, but I saw it in a different way.

Instead, it showed Asuna in the very worst of conditions but still never losing her resolve.

This movie showed both of those sides of Asuna.

Towards the beginning of the film, she is strong in a literal sense. Out of all of the main cast of characters, Asuna has one of the highest ranks.

She even shows up to a boss fight without Kirito because she doesn’t really need him to play the game and succeed.

Eventually, her memory of Aincrad is wiped after dying in the game.

Rather than give into despair, she fights for her love for Kirito.

She knows that memories of her past with him are gone, but she constantly keeps a smile on and writes in her diary to remind herself of her love for Kirito.

I think it was really cool to make her multi-dimensional in this film.

Next is the GGO/Phantom Bullet Arc.

SAO re-invented itself in every story arc. In the GGO Arc, it felt a lot like a “Murder Mystery” type plot.

Kirito found out that people were dying in GGO and was tasked with investigating and figuring out why that was happening.

In Ordinal Scale, something similar happens.

He starts investigating early as people are innocently enjoying the AR game.

He eventually spends a ton of time digging up as much info as he can and eventually figures out the scheme of just why memories of SAO survivors are being stolen.

I worked at the Aniplex Booth at Anime Expo and guess who won the character election? Yup, it was everyone’s favorite Ice Sniper...Sinon.

Some of the coolest scenes in the GGO arc are in the BOB tournament with Kirito fighting up close and Sinon sniping from far away.

There is one boss that Kirito tries to fight all by himself and Sinon shows up and helps him out!

Just like in the GGO Arc, Kirito gets dangerously close to the bosses while Sinon shoots from farther away.

She was really the only side character that was able to help Kirito fight an AR Aincrad boss.

From the very short Caliber Arc, I think its small influence was the inclusion of a ton of side characters.

While on a quest in ALO, they all go in a party and it is the first time we see characters like Lisbeth and Silica help out in some sort of boss fight.

Towards the end of the movie, they all fight the final boss together. On top of the main supporting characters joining, a ton of the super minor characters show up and I think that was really awesome!

It was cool having a ton of characters show up at the end, but I was really hoping that characters like Agil and Leafa had a bit more screentime.

While there are quite a bit of feels throughout the movie, one scene comes to mind.

Oh, but as you guys know, the real kicker was her showing up and holding Asuna’s hand as the skill was activated.

So overall, I highly recommend this movie to any SAO fan.

Any SAO super fan will love it.

Any casual fan that has at least seen the first half of the first season can enjoy it.

This movie has everything a Sword Art Online fan wants to see on the screen.

I give it a solid 9.5/10! I would give it a perfect 10 but I think that Agil and Leafa needed some more screen time.